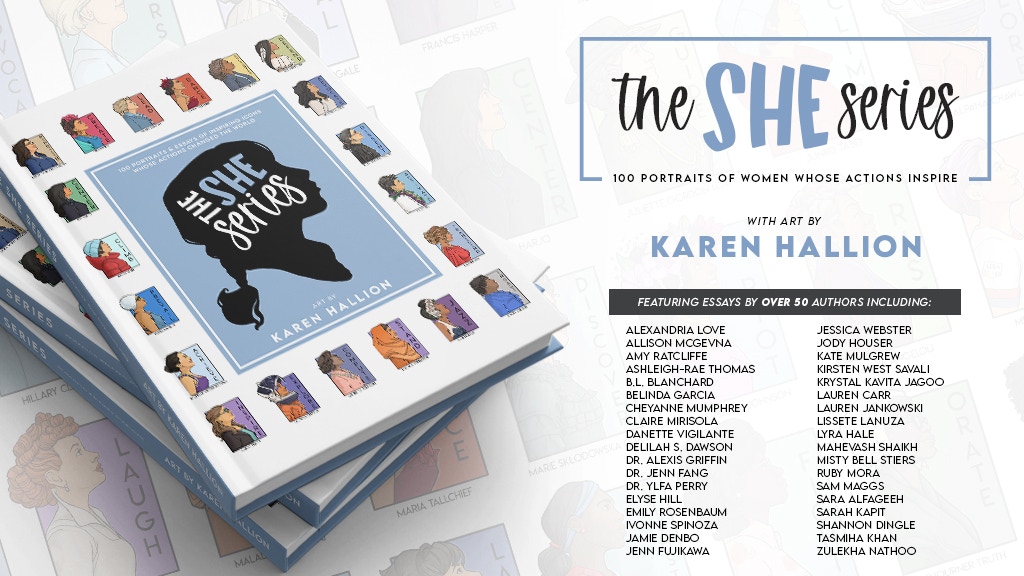 The She Series Book

The She Series: 100 Portraits and Essays of Inspiring Icons Whose Actions Changed the World

Latest Updates from Our Project:

This was supposed to be a stretch goal but I decided to go ahead and add it. :)

There should now be an option to add a second sticker pack to your pledge if you would like. This pack includes:

Let us know if you have any questions! There are six days left for this campaign. We got a little delayed in sharing full essays, I was supposed to share two...instead I will share four. Here is the first one, it's the final version of the Carrie Fisher essay by Delilah Dawson.  I will also be sharing Michelle Kwan, Frida Kahlo and Marie Skłodowska Curie in the next few days.

Thank you for making this campaign such a success! :)

"Carrie Fisher is best known for playing Princess Leia Organa in the Star Wars franchise, but she’s so much more than a princess in a metal bikini who strangled a giant space slug to death. In addition to acting, she was also an award-winning, bestselling author of fiction and memoirs, a screenwriter, a playwright, and a highly-paid “script doctor” whose wit and experience helped secretly improve dozens of movies, including those set in a galaxy far, far away. But her ability to inspire goes beyond her career; she inspired so many of us to embrace our true self and be more than a damsel in distress.

Both of Fisher’s parents—Eddie Fisher and Debbie Reynolds—were famous actors, so she grew up in Hollywood and was performing in nightclubs and on Broadway with her mother by the time she was 15. But despite her fame and privilege, Fisher’s life wasn’t easy. She had a complicated relationship with her family and was very open about her lifelong struggle with mental illness, including bipolar disorder and addiction. The people who knew her best described her as tough, witty, realistic, and wry but never cynical. Much like Leia Organa, she was driven by a deep well of hope. The causes she supported included women’s advocacy, animal rights, mental health, Alzheimer’s, HIV/AIDS, and LGBTQ issues. She was dedicated to ending the stigma against mental health disorders and once said, “Mothers can tell their kids when they are upset with the diagnosis that Princess Leia is bipolar, too.”

When I was a kid in the 1980s, most of the female characters we saw in the movies were girlfriends, wives, or victims—and they certainly weren’t the main characters of science fiction and fantasy stories. The first time I saw Princess Leia on the screen, I realized that I could be the hero of my own story instead of just an accessory to the plot or a sidekick to the leading man. Sure, Leia was a princess wearing a long white dress with her hair rolled up like cinnamon buns, but she was also giving orders, performing rescue missions in disguise, befriending fierce teddy bears on forest moons, and piloting speeder bikes while taking out enemies with better aim than Luke Skywalker himself. She was the first princess I ever saw who didn’t act like my preconceived notion of a princess. I wanted to be her.

And the inspiration didn’t stop there. Fisher wasn’t just a princess; she went on to do all the things I wanted to do. She wrote novels and movies and plays and wasn’t afraid to write about the dark parts of her own life. Growing up, I thought you were supposed to hide those things and pretend everything was great, but Carrie Fisher didn’t have time for that kind of make believe. She was unapologetically herself, willing to expose her greatest weaknesses and fears, knowing that it might help someone else. After all these years, she felt like a friend, a wise aunt who I knew would protect me fiercely and always cheer me on. Even though she is gone, she inspires me to be that person for the next generation.

The first time Carrie put on Princess Leia’s white outfit, George Lucas told her she couldn’t wear a bra. When she asked why, he explained that there is no underwear in Star Wars because as your body expands in space, a bra would strangle you. Carrie Fisher then wrote, “I tell my younger friends that no matter how I go, I want it reported that I drowned in moonlight, strangled by my own bra.” That’s how I like to think of her—laughing by the light of the moon, making the night a little less dark for those of us she inspired."

The next stretch goal to unlock is ten more portraits/essays. I am fairly confident we will get there, so I wanted to share with you a sneak peek at what one of those portraits will be.: Esther Earl

I met Esther Earl's family through Hank and John Green. Her mom Lori commented on one of my posts recently that Esther would be a wonderful addition to the She Series and I was embarrassed that I hadn't thought of that myself. I reached out to Lori and asked if she and Esther's family would be willing to write the essay for Esther and she said yes! She chose the word "Brighten" and said ""From her fly-away hair, freckles and dimples to her name meaning Star, and to a holiday she chose about telling family and friends that we love them....her life was all about lighting up the world!"

You can learn more about Esther here:https://www.tswgo.org/


Also, if we unlock five more achievements,. I will donate 50 books to local libraries and I will be taking suggestions on which libraries from you guys! I would love to see more fan portraits or essays (essays don't have to be long, just a few sentences will count) on social media with the tags #SheSeriesArt or #SheSeriesEssays :)


Please let us know if you have any questions regarding stretch goals, achievements or adding things onto your pledge. And THANK YOU for making this Kickstarter such a success!

Throughout the campaign we are hoping to spotlight every author. Here is the first one! Misty and I went to Ringling College of Art and Design together. We bonded over a shared love of Anne of Green Gables and Rent. She was one of the first people I thought of asking to write for this book and her answer was a super-enthusiastic "yes!".  Misty is an amazingly talented artist and author, and you can find out more about her work here:

You can also follow her on social media here: